3D Printing: The Secret behind the amazing technology

This technique has been around for 25 years and has grown enormously in popularity in recent years, and has become a lot cheaper. 3D printing is a technique in which an object is built up layer by layer. There are many different methods for doing this. There are plastic printers, glass, chocolate, plaster and much more. At the moment they are still developing. In the medical industry, people are busy experimenting to be able to print working organs 3D and eventually even transplant them into people. You should go for advanced technology here. 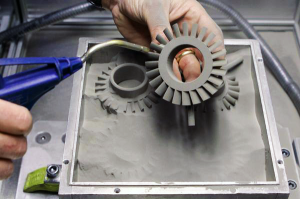 Is that also possible at Color house?

You have your own 3D printer, but also many connections to be able to offer different techniques. A small compact 3D printer, PCL material that makes a plastic example of your design is ideal for small parts or nice giveaways.

With 3D printing, objects are reproduced from the source material that is dosed layer by layer in very small quantities. Often molten polymer is used for this, but it is also possible to use powdered material which is hardened after the layer has been deposited. All this under the control of an instruction file that tells the 3D printer what each layer looks like and which material should be used. 3D printing is possible with polymers but also with metals. Just about everything has to do with that.

Printers are still a bit difficult for private individuals to get, but the true hobbyist can come a long way. Professional parties have already jumped into this gap. In our country, for example, FabLab3 already offers the possibility to print just about anything you want.

However, three-dimensional printing quickly clashes with intellectual property rights. For example, an object can be protected by copyrights, trademarks, design rights or patents. Counterfeiting is then not permitted. The intellectual property (IP) is based on the idea that only the creator or inventor or designer of an object can reproduce it. This is based on the assumption that he must be able to recoup his investment with that control right.

Paying per copy made is a natural model: if something is popular, it sells well and then one earns a lot, and if something disappoints then it doesn’t sell and then the maker is out of luck. For music and films, that model was already under considerable pressure from internet distribution, but the pressure from three-dimensional printing is only increasing. How do the well-known IP rights now relate to three-dimensional printing?

3D printers and their capabilities are a great technological innovation. And when we talk about intellectual property in innovation, we immediately end up with patents. Patents are meant to prevent counterfeiting of technical inventions. A patent can prohibit anyone from copying, trading or using the invention. The invention must be new and non-trivial1, but according to many, the limit of non-trivial is far too low.

There is, however, an important limit to patent law: a patent holder can only act against commercial or business use or production of the invention. A private individual who imitates an invention does not, by definition, commit an infringement. Because in most cases printing is done by private individuals, patent law seems less important.